Today’s random pictures are from the Japanese Taiga Drama “Taira no Kiyomori”. Deathbed scene–notice Kiyomori has his head shaven (having taken Buddhist vows) and his daughter is also showing that she took vows by wearing a zukin.

MAKING THE SCA BETTER AND BIGGER
More than 50 years of people have contributed to the SCA, but the world–and people’s social networks (and opportunities therein)- has shifted over the years. How do we leave the SCA a better place than we found it?

Of course the SCA has changed over the past 50 years. Having been involved now for 27 of those years, I’ve watched many of those changes myself. Times change, people change, so too does the Society.

I feel that ordinary rank-and-file SCA members like myself, non-peers, are the key to the Society’s future. So many people do not make it to peerage rank, and I’ve seen many who do burn out from the work it took to get there. I’m not calling them out on it: this is just a hobby and people have very legitimate reasons for deciding to stop participating after getting to peerage level that have nothing to do with the SCA.

But we non-peers play an important part in the Society. Not everyone can be or needs to be a leader. Sometimes a good follower is more valuable. Many hands make light work, so if everyone helps out just a little, a lot of progress can eventually be made.

How to do this? At events, maybe devote one or two hours to helping out somewhere. Is there something you are passionate about and know how to do? Teach someone. It doesn’t have to be a formal class–I’ve often learned plenty in informal situations where someone has taken the time to show me how to do something. Pass it along.

There is often talk of a push towards recruitment–“Bring a friend to Lilies!” sort of thing. That approach has never worked well with me. I showed up at the SCA’s door of my own account, not because someone dragged me along. What was important to me was that people helped out afterwards. New people aren’t the only ones who need a hand from time to time. Maybe you know someone who has moved into another group, maybe someone is coming back from a hiatus, maybe someone is feeling frustrated with a perceived wrong.

Reach out. Talk to these folks. Listen to their concerns. Sometimes, all that is needed is a sympathetic ear or a sign that someone cares that they are there.

It’s very easy to get caught up in our cliques and ignore others around us. I’ve been on the verge of rage-quitting a few times because I’ve been ignored when I needed help, and what has stopped me EVERY TIME is the action of ONE person, either by word or deed, reaching out to help or just to acknowledge my problem (even if they can’t solve it). And it doesn’t have to be a peer. Anyone can do this. 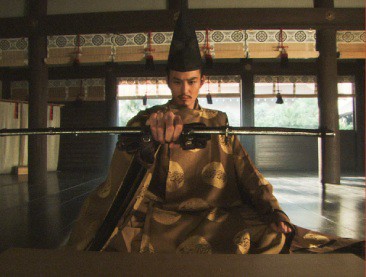 Also from “Taira no Kiyomori”: Minamoto no Yoritomo reaches for the future.

Social networks have definitely changed over time. Some people really have issues with online SCA activity, especially when people who haven’t been active for a long time pipe up on some topic. My advice here is also to reach out to these people. There are many reasons why people can’t make it to events–time conflicts, distance, and especially money issues.

I believe that once you are SCA, you stay SCA unless you actively decide the hobby is not for you. So reach out to those online acquaintances who haven’t been to an event in 5 years. Tell them they are still welcome, and ask them to come out and play again. If they work weekends, encourage them to come to a local meeting during the week. That is still participating. Local groups are the backbone of the SCA and anything that makes them stronger makes us all as a Society flourish.

There will be people who just can’t get out, for whatever reason. But perhaps they can still do research or make things, and eventually find the time or means to participate again. The internet has been a great gift in this manner.

Some would argue that internet involvement isn’t “real SCA”. I feel that view is short-sighted. Real SCA is what you make of it. Certainly, there is nothing like being out with a bunch of your fellow history-buffs having fun. But again, real life can get in the way. Don’t cut people out because they can’t get out to events often. Make them feel welcome, and maybe when they can manage to come out, they will. Especially if you post about the fun you are having!

Regarding trolls (and not of the Gate variety!)–treat them as you would any other troll you run into on the internet. Once you realize someone is just out to argue or cast negativity on every single thing anyone says, ignore them. You’ve got better things to do.

So in conclusion, the average non-peer SCAdian can actually do a lot towards growing and improving the SCA, at their own pace and in their own way. The key is to be open and welcoming.