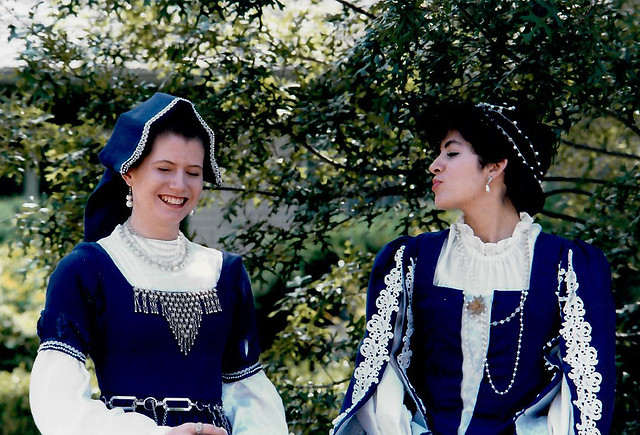 So last month (July) was an anniversary for me of sorts: 30 years in the Society for Creative Anachronism SCA. I did have some interaction with the SCA in the 1980s, even attending a couple of events, but I really didn’t seriously get involved until I moved to Louisville, KY (Barony of the Flame).

After a rough patch and hospitalization, I moved up there from Texas to be closer to my parents, who had themselves moved up to southern Indiana following Dad’s career. I didn’t know anyone else up there, and since Louisville didn’t have a Renaissance festival at the time, I decided to try SCA as a way to get out and meet people, hopefully fellow geeks like myself. Things were very different then–the internet was in its infancy. I think I heard about the Barony of the Flame in the newspaper–they were giving a demo at Central Park, so I decked myself out in some of my old Ren Faire garb (both dresses in the picture were mine–I had lent one out to my college roommate, Lulu Valdez, when I brought her out to the faire one weekend). My ploy worked, I met some of the local group and even took part in the demo even though I was brand new! (Ironically, some years later, Robert and I lived in an apartment across from that very park!)

Over the years, the SCA has been a great place to meet people. It’s wonderful to talk history with folks whose eyes don’t start glazing over when I get excited over historical minutia–in fact, they often have more knowledge to share! The SCA today is in some ways quite different from the group I joined back in the day, but some things have stayed the same. I’ve changed a lot as well (hopefully for the better?). I miss some of the silliness of the old SCA that was more in line with the sci-fi/fantasy community, but OTOH, perhaps we grew out of that? I was 25 and single when I joined and I had different priorities, whereas now I am 55 and happily married for 22 years. Not so much into partying now, although a good bardic circle can woo me to stay up past my bedtime. I tried to like camping, I really did, but it didn’t work out. Fighting was awesome until my knees went out on me.

Still so much to try, though!I love that there are so many more options available now. There weren’t a lot of women fighters when I started (and I was a fighter in the beginning), rapier was just getting a toehold in a few kingdoms, and who could have imagined we would have equestrian activities?! The last one really excites me, although I am not a rider myself. So much progress has been made in the Arts and Sciences, too. It’s a magnificent thing to see. Allowing people to take on non-European persona and not just be “visiting” has been an important step as well. And yet, SCA kept the “Big Tent” concept, which allows newcomers to start with “an attempt at pre-1600 clothing” and go forward (or not) from there.

I wouldn’t recommend my path in the SCA for the ambitious–I mostly stayed below the radar. “Have fun, make stuff, help out” has been my motto, but since so many things are so interesting, I have a variety of persona, and Life being Life, I moved around a lot. And I won’t lie, not everything was puppies and rainbows, but for the most part, my experience in the hobby has been good. I certainly met a lot of interesting people and learned a lot of fascinating things, many of which I would have never thought to try, had I not been a part of this hobby. For this I am truly grateful.

I see people posting about how social media has damaged the SCA in recent years. I don’t believe that to be true–trust me, there was plenty of contention back in the old days, just maybe not as out in the open? So my advice to fellow SCAdians is this: follow your passion, ignore the haters, and keep a foot in the mundane world so the hobby doesn’t overwhelm you. Go at your own pace, and never stop learning. Give back (or pass kindness forward) when you can. Take a break if you need it. Most of all, remember this is a hobby and hobbies are supposed to be fun. Thank you, SCA, for all the good times. I’m looking forward to seeing what the future brings.