Just posting this here to remind myself that I want to visit this place when I finally have a chance to go to Japan.

The Kampo Museum of Calligraphy, in Higashiomi, Shiga Prefecture. It’s about halfway between Nagoya and Kyoto. Here is the webpage: http://www.kampokan.com/english/

Another answer to a FB question, this time about the process that goes into making the colorful paper that poetry is often written on, like this 10th century example from the collected poems of Lady Ise: 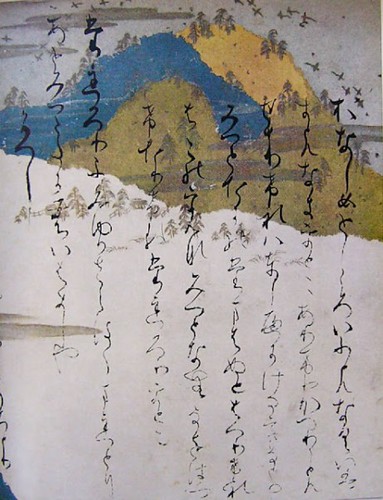 The paper is dyed (by various methods: sukizome (adding pigments at the time of production), hitashizome (soaking paper in liquid dye), hikizome (applying dyes with wide brushes), and fukizome (spray-dyeing) or marbled (Suminagashi 墨 流 し), then collaged in a technique called chigiri-e (ちぎり絵). It was (and is) hugely expensive–the washi (mulberry paper) has long fibers and is strong enough to withstand that much treatment.

I don’t know the kanji yet for sukizome, hitashizome, hikizome, or fukizome, which came off of the Tokyo museum website in an English description of an exhibit. These are very specific and technical terms, so they aren’t found in general dictionaries and I will have to dig about a bit to see if I can track down the kanji for the words. The paper I’ve gotten from Nihon Shuji tends to only be simply dyed.

To reproduce this kind of paper would be a major project by itself, certainly!

My shodo teacher Tony Skeen just published a couple of reference books that will help those looking to make inkan (seals). Both are intended to be used in tandem with the New Nelson’s Japanese-English Character Dictionary.

The first volume is to help people sound-out their (non-Japanese) names in Kanji. There are choices–you can go by meaning, but then the pronunciation will be completely different, or you can go by pronunciation and find comparable kanji–THEN you have to watch for the meaning and also double-check to make sure it doesn’t have some slang meaning in Japanese that might be embarrassing. So this first volume is a list of kanji by sound, in English alpha-order. Choosing Kanji for Use on a Seal Stone

The second volume has brushed tensho-script examples of the kanji from the first volume, both as normal and also in reverse (which is how you would carve it to make a seal). As far as I know, there is no other English-language resource on tensho-script that is this detailed. Tensho Kanji for Making a Seal Stone

Both of these are meant to be used in tandem with the New Nelson’s Japanese/English Character Dictionary. Nelson’s is one of the best J/E Kanji Dictionaries available. Here is the Goodreads link to it. They have it listed new on Amazon for $44 dollars, but seriously, shop around. I found mine new on Ebay for $18, and sometimes you can find it for even less! The New Nelson Japanese-English Character Dictionary. NOTE: Be sure and get the latest version, so the numbers match up. Also, it’s much larger than the original.

I’ve been studying shodo with Tony Skeen for over a year now. He’s a certified instructor through Nihon Shuji Kyoiku Zaidan and has been practicing shodo for over 20 years. The books are pricey, but he’s not making much of a profit–the cost is mainly due to the books being self-published on small print runs.

He let me look at the proofs when he was working on the book and the books are very to-the-point. He just wants to make it easier for people to make better inkan. The online sites that offer to create tensho often use a computer font. These are HAND BRUSHED examples.