In which someone asks a question on the SCA Japanese FB page and scrambles my brain. HE Baron Akitsuki Yoshimitsu asked about the translation of a certain modern piece of Chinese calligraphy, dated 1958, by Wing Gig Fong, a Chinese-American artist.

Here’s the piece, which is owned by the Smithsonian institution. You can see the piece here on their webpage. 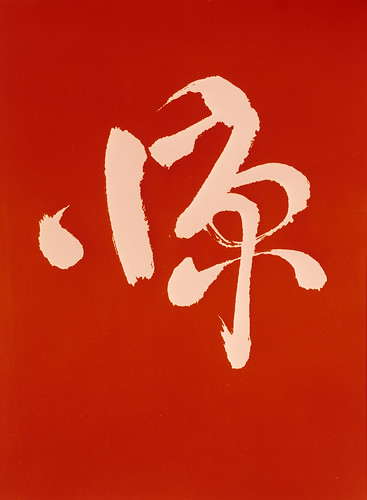 Wah…abstract modern sosho! My brain! The top character is almost certainly 少 (ON: shou KUN suku/suko) which means few, little. Which makes sense as the original Chinese for the phrase the piece was named was 少则得多则惑 “He who obtains has little, he who scatters has much”). But the second one has me puzzled. Maybe 不 (ON: fu KUN: zu) which means un-, non-. But while 少不 is not a really a word, 不少 (fushou) in Japanese means “not many” while 不少 ((bùshǎo) in Chinese means “a lot of”. It could be the artist is punning and including a little and a lot in the same piece. But I’m really stretching here and could be completely wrong. Sorry I can’t be of more help.

It’s certainly not a name or anything. Considering that it is a 20th century abstract piece, I don’t think I’m too far off in my guess of its meaning. But again, not sure on the lower kanji, and I do Japanese, not Chinese. (Any Chinese I know is second-hand through my Japanese studies, and I can’t pronounce it AT ALL.)

Anyway, that killed about two hours of my day. It’s so frustrating! I got to take an intensive Japanese course about 13 years ago, and have tried to learn on my own since then, but self-study is not easy, and my chances of doing the immersive thing and staying in Japan for 6 months to a year are nada.

If I am completely off base here, please comment and let me know. It’s the only way to learn!

A few notes here: modern sosho can be quite different from classical sosho, which tends to be very thin and whispy. The style I study with my shodo teacher, which was taught by the calligraphy master Kampo Harada-sensei, tends to be of a modern bent. For SCA purposes, most of the styles (tensho, reisho, kaisho, and gyousho) are not far off, but Kampo’s sosho was very stylized and modern. He could do the classical style, of course, but a lot of what I’ve seen of his own work has a very mid-20th century feel. It’s beautiful, but something to keep in consideration if you are working on a Japanese scroll for SCA–try to work off of pre-16th century examples. Copperplate is a beautiful hand for Roman-style letters, but not something the SCA would use in a scroll since it is more 18th-19th century. Same applies here.

In answer to a question on the Calontir list about period (pre-1600) paper mache:

The Japanese have a kind of roly-poly doll that was made via a paper-mache process. They are called Okiagari koboshi (起き上がり小法師) and date to the 14th century. The term means “Little monk that falls down and gets up again.” The famous Daruma dolls are a form of Okiagari koboshi, although they really became popular in the 17th century (post SCA period). Japanese paper (washi) is well-suited for paper mache because it has very long fibers and is strong even when wet. I know they also made masks of paper and lacquer, which were used for theater (like Noh plays) and religious festivals, but I’m not sure of the date on those. Wooden masks are definitely in period–the paper ones I’m not sure about.

Extra for here: while paper was used extensively in Japan very early on, the “traditional Japanese paper crafts” that we often associate with the Japanese (like origami) usually date to the Edo period (1603-1868). The technology was there, but because there was several centuries of internal warfare during the Japanese Middle Ages, there wasn’t much opportunity to devote time and effort to such crafts. However, during the stability of the Edo period, a lot of different paper arts flowered very quickly. The issue for an SCA person is trying to find pre-Edo examples of certain crafts which may or may not have been done before the year 1600.

I was answering a question on the SCA Japan FB page and thought I’d record my answer here as well, since I just spent about an hour translating Japanese webpages.

(I found this image on a Google Search. It is from a Japanese photo blog, looks like someone taking pictures at the 2014 Jidai Matsuri parade. The photographer’s handle is EGACITE and his blog is here.)

According to the Costume Museum’s Japanese website, that particular headgear is called katsura tsutsumi 桂包 (かつらづつみ). Katsura is a village, tsutsumi is a long wrapped cloth. According to legend, the women of Katsura began wrapping their heads this way back when the Empress Jingu conquered the three Han states in Korea–the original wrapping was her belt (literally 腹帯 (ふくたい) fukutai = abdominal band, bellybelt, maternity belt, per WWWJDICT translation). It goes on to say that there is no evidence that the legend is true. Here’s a link to a different translation of the page. And yes, as Mistress Saionji says, it’s a long wrapped rectangular cloth. (Side note: Zukin are a different type of headdress–it literally translates to “hood” and was mostly seen on women who had taken Buddhist religious vows of some type.)

Here is a translation I did off of another Japanese page that was defining the term katsura tsutsumi from the Daijirin 3rd Edition: Wrap the head from behind with a long cloth such as a towel, Knot in front, then pull back the remainder on both sides of the face. This was customarily worn by common women of the Muromachi period. “Katsura” [which can mean wig] comes from the village of Katsura.

And a partial rough translation from the Encyclopedia Nipponica: A woman’s headdress from the late middle ages. Wrap the head like a headband in a long white cloth, tied a bit lower in the front. It is also called “Katsura-maki”. From Katsura Village in the Kyoto Western Suburbs. The custom was supposedly begun by fishwives and candy sellers carrying their wares. Legend claims it was bestowed on the women of Katsura by the Empress Jingu, who conquered the Three Han States (in Korea). Pictorial evidence shows this a custom of common women rather than those of the aristocracy, and there are many depictions of common women so attired.

There’s more, but I have to get back to real life. Didn’t realize there would be so much out there on a simple search. Here’s the webpage where I found the above two definitions.