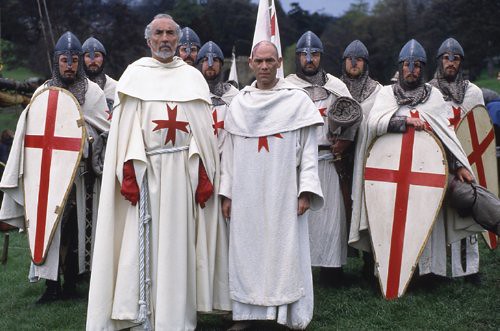 Another Ivanhoe picture, just because. This is from the 1997 mini-series, with extra servings of Knights Templar!

The SCA is built around the mystique of a chivalry “Dream”. It’s also got a reputation for being an all-consuming devourer of time, money, and social lives. Yet many find the Society a richly rewarding experience. How do you position yourself to participate in a healthy way?

I actually touched on this topic some in my first Peasant Perspective post, but the topic is important and worth more time.

Something you see in all kinds of fandom related activities (not just SCA) is tension between the ideas of Fandom is a Way of Life vs Fandom is Just a G-ddamned Hobby. The SCA can be an intense hobby and some people like to approach it like a career, while others just like to come out occasionally and have fun.

This may be tied to personality–for example, my father likes to play bridge, and now that he’s retired, he plays it several days a week like it is his job. It keeps his mind sharp and he enjoys getting out to see people, so I try to think of that attitude as healthy. Some people can spend a few days a week on SCA activities, and then hit three events per month with no trouble.

But what works for some people doesn’t work for others. These people might be introverts, or maybe they have family obligations or perhaps they work evenings and/or weekends. Maybe they have other hobbies that they want to pursue.

The trick is to figure out how you want to participate in the Society and not feel guilty or pressured because you are playing one way and not another. There may be times when you are able to devote a lot of energy to the hobby, and times when Life Happens and you need to step back and deal with that.

The burnout that I’ve seen from others and experienced myself tends to happen when one is devoting more energy to the hobby than one has. Sometimes it is a tricky business, figuring out how much you can handle. A new job, a new relationship, a health issue, or an injury can affect your energy levels, and it’s hard to step back, especially if you are the type who approaches SCA as a Way of Life.

Avoiding burnout means learning to be aware of growing tension within yourself. If an activity that once brought you joy is feeling more and more like a burden, then it is time to step back. That doesn’t mean you have to quit! Just slow down and allow others to take the lead for awhile. 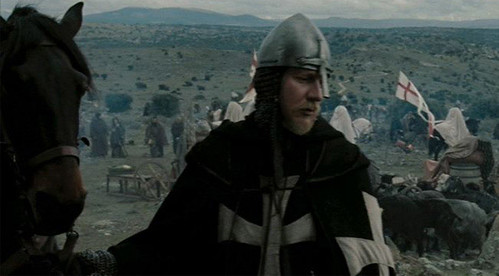 Okay, NOT from Ivanhoe, but while we’re on a Crusader theme, here’s my favorite character from the film, Kingdom of Heaven: The Hospitaller!

Yeah, easier said than done! However, most of the people that I’ve known who have been in the SCA for a long time (2 decades or more) have stepped back on occasion, caught their breath, and then come back when they get their second wind.

However, one thing about stepping back is that you learn the SCA can go on without you, and people’s memories can be remarkably short. It can hurt when you come back after a hiatus and find that few people remember you or the things that you once poured your heart and soul into. How do you stop from being bitter?

I’ve had to struggle with that. For me, the answer is to go back to the beginning. You can do that by either exploring another facet of the Society (there are so many things to do!) or by getting to know new members, and helping them to experience the fun that can be found in this hobby. I love being able to point new members towards things that might interest them, or introducing them around to other experienced members who want to share what they know.

It isn’t easy to watch people who you saw come in as newbies advance by leaps and bounds while you are sidelined. My advice? Be happy for them. Sure, there are a few exceptions of people who got lucky (especially in the very early days of the SCA), but usually a peerage or high award is the result of hard work. The Society is built on courtesy, so give these people the courtesy of respect.

A few brief words about SCA politics here. I’ve gotten caught in the middle of some nasty political struggles over the years. In my earlier days, I couldn’t seem to avoid them. But what I found out was that many years later, most people either don’t remember or don’t care about something that happened way back when, except maybe as gossip. All the anger and frustration that I spent on certain situations was, for the most part, a complete waste of time.

As for the gossip, well. I recently ran into someone from my original Barony. I had moved away 20 years ago, but he had been a newbie just as I was leaving the area. We did have a few acquaintances in common, and as it turns out, he had heard of me, and not in a complimentary way. We both laughed about it when he realized who I was. He saw that I obviously was not anything like the person he’s heard about. The person most hurt by this was whoever had told him that story about me.

Another time, a person was telling a story about a group I was a part of, and mentioned me, not by name, but by action. It was also not complimentary, and I called him on it, because the story he was telling second-hand was completely different from what I had experienced in person. Awkward, but again, what did it matter in the long run? That group no longer exists, I’m not the same person I was 15 years ago, and besides an odd story or mention on a map, nobody much cares about what happened.

So if you find yourself in the middle of some SCA political drama, stop and step back and ask yourself what will it matter in 10 years. Now for some things (say, safety matters like marshalling or legal matters), yeah, stand your ground, do what you need to do. But otherwise? Don’t waste your happiness on something that is an illusion. Don’t become bitter over something that few people will even remember in 10 or 20 years.

Hopefully these hints will help people who are feeling frustrated in the hobby find a bit of peace and be able to continue playing. Remember, it’s your hobby, you play it at a pace that suits you.