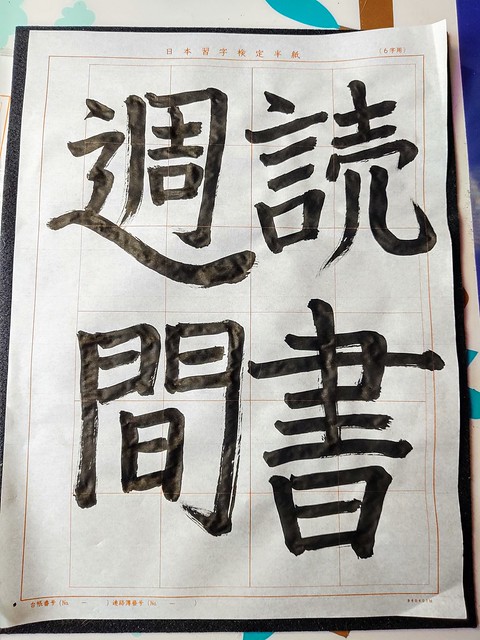 So in this time of quarantine, since the event I wanted to attend today was cancelled, and since I am self-isolating for a while due to recent travel (just got home Tuesday from San Antonio), I figured it was high time to get back to my shodo practice, which I have shamefully neglected in the past few months since my father’s passing. To be honest, I haven’t had much free time.

But the brush has been calling me and today I took a few hours to devote to practice. While I was doing that, I thought I would share a few pictures of some of the equipment I find useful, and how I do my practice. I apologize for no video, but I have neither the technology or expertise in that area to make one. 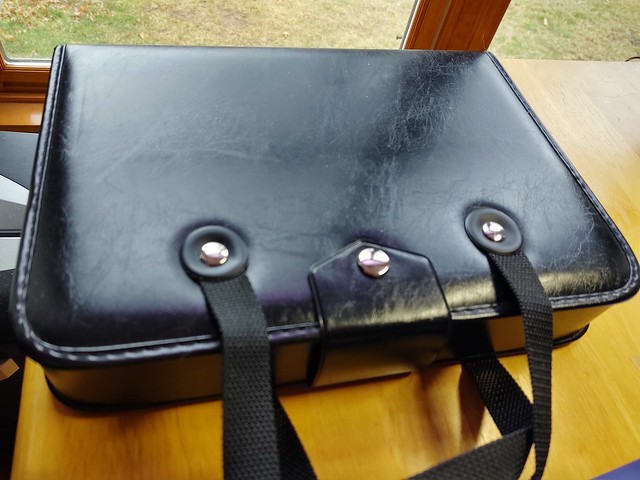 So this is a useful thing–a briefcase with basic shodo supplies. You can find them sometimes on Amazon or Ebay. Prices vary widely, so shop around. 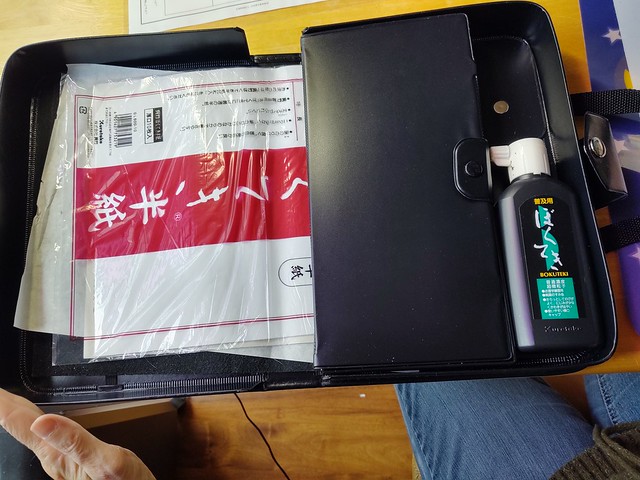 When you open it up, you can see there’s space to store a shitajiki (felt that you lay down under the paper) and some extra paper. There’s also a small bottle of ink. 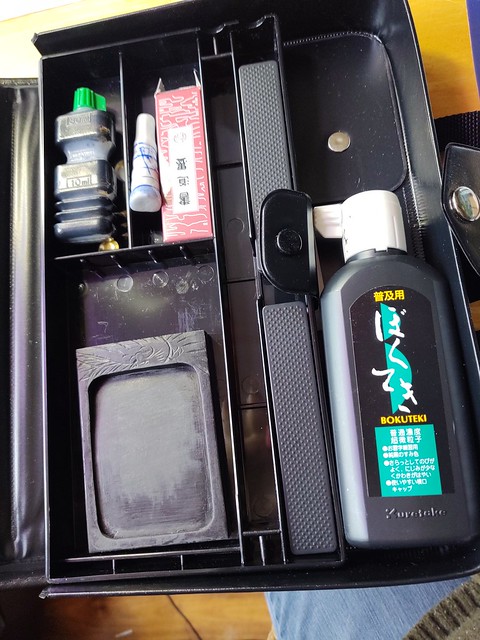 Opening the smaller area, you can see a couple of bunshin (paperweights), an ink stick, a chopstick holder that I use to balance the brushes on when not using them, a little bottle that holds excess ink, and a stone suzuri (inkstone). The set actually comes with a plastic one, but I prefer to use stone when grinding ink. The plastic suzuri are perfectly acceptable. Not included in the picture is a hanko (personal seal) as I haven’t carved mine yet, or the red paste used for the seal. 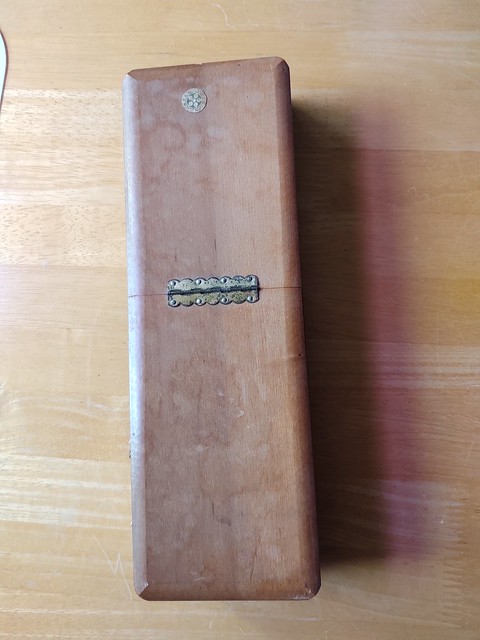 Here is another example of a shodo travel case. This is an old one, probably from the 1950’s-1960’s. I think it was $10 on Ebay when I got it. They come up from time to time and sometimes they can be a bargain. 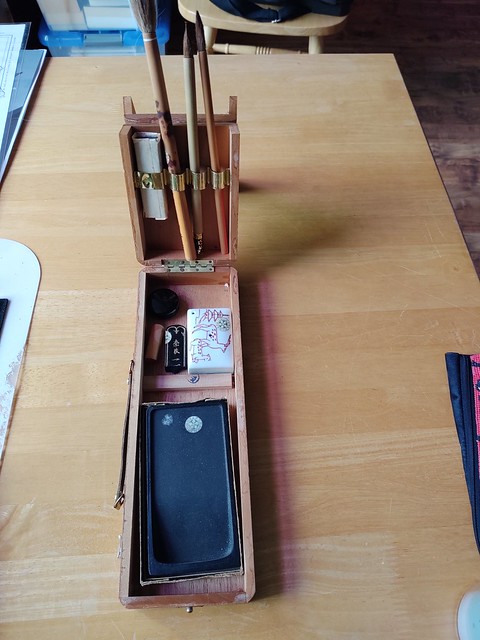 Here it is opened up. This one does have the paste (it’s in that little round black container that is barely visible) and a hanko (not mine, but I can recarve it). The case is too narrow to hold standard paper or shitajiki but is small and easy to carry, plus useful to set up in a small space. 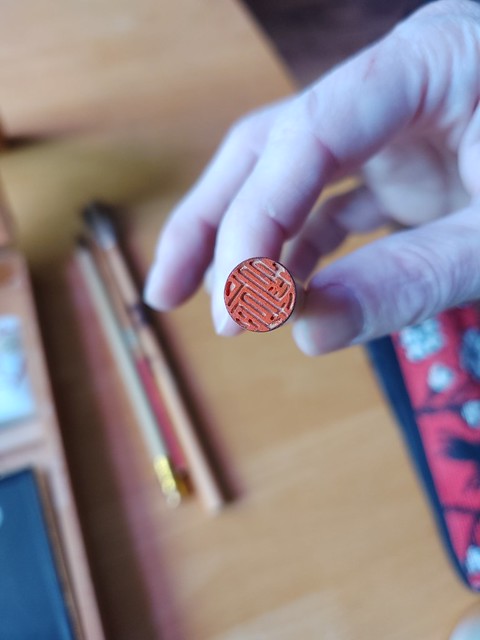 Here is the hanko, a personal seal. For SCA-purposes, this is smaller than the inkan (seals) seen on most medieval artwork. These smaller seals came into popularity during the Edo period and are still in use today. 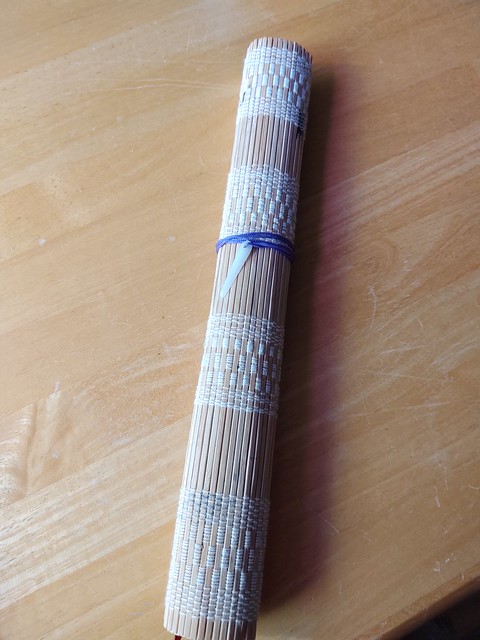 This is what I usually carry my brushes in. It’s a simple bamboo roll, similar to what is used to roll sushi rolls. 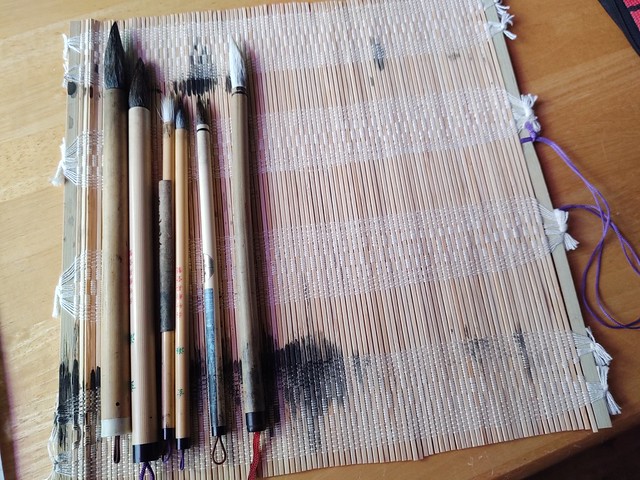 And some brushes. The white-topped brushes are ones I use with “water paper” for practice, although I’ve moved away from that as the water tends to dry too fast when you are brushing more complex kanji. Good tool for beginners, though. 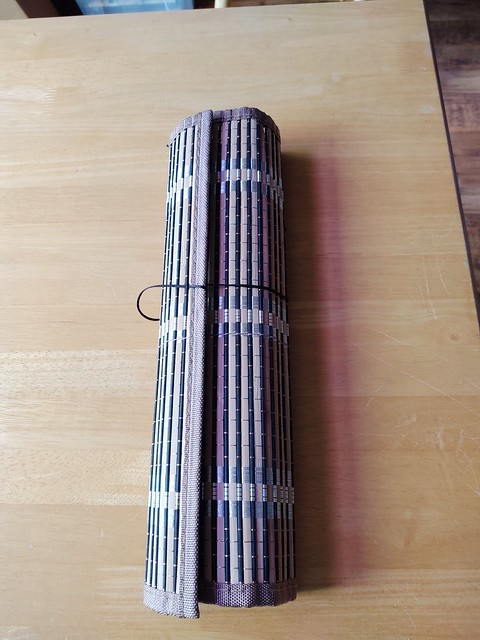 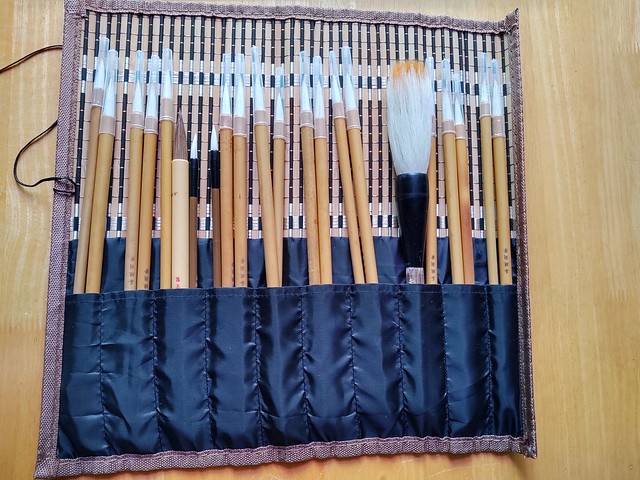 Here’s a bigger version. It holds more brushes and of different sizes. I don’t encourage keeping the caps on brushes–the brushes with caps are extra ones I have on hand if I need to teach. I think I found this one on Amazon as part of a sumi-e set? 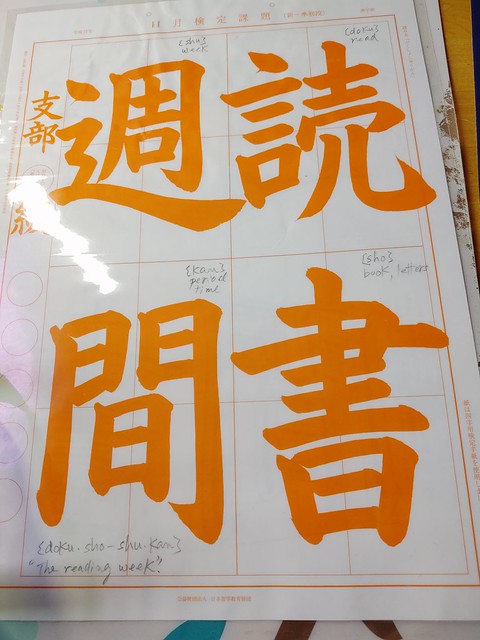 And here’s today’s practice Yojijukugo (proverb). The kanji say “dokusho shukan” meaning “Reading Week”, which is usually TWO weeks in late autumn October 27th to November 9th. This article here explains a little about the practice. While this is the wrong time of year, I think the COVID-19 quarantine gives us all a chance to catch up on our reading, so that’s why I chose this proverb. 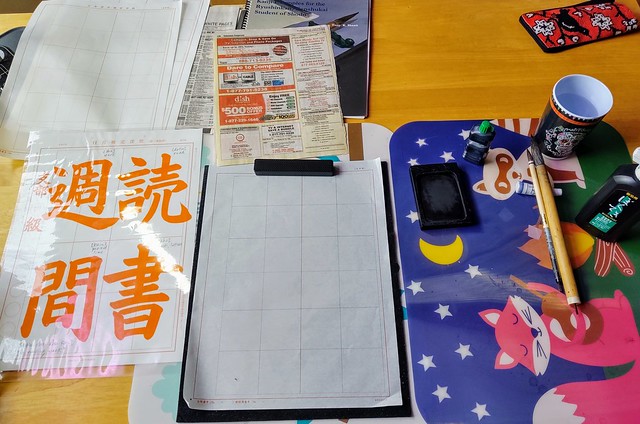 Here is my usual set up. Horribly modern, but the plastic protects my working table. I keep my example on the left, where I can easily refer to it, paper towards the top (well away from the ink), and ink and brushes to the right. One of the bunshin paperweights is at the top of the paper. I usually use my free hand to hold down the bottom of the paper, as it gives me more flexibility than a second bunshin would. 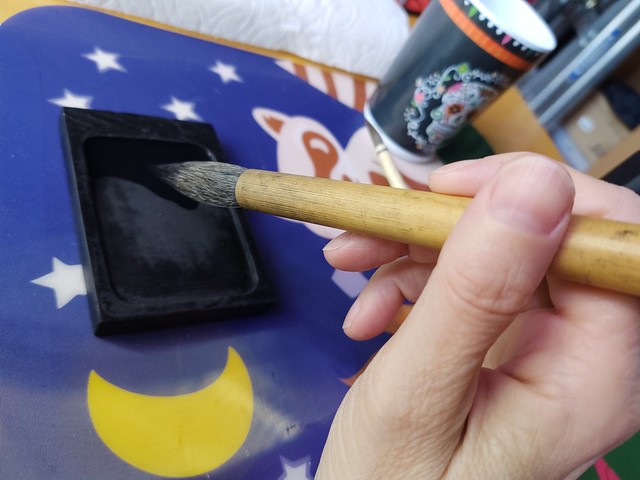 Loading the brush with ink. I was eager to just get brushing today, so I didn’t grind my ink this time. I explain about that in a later post. 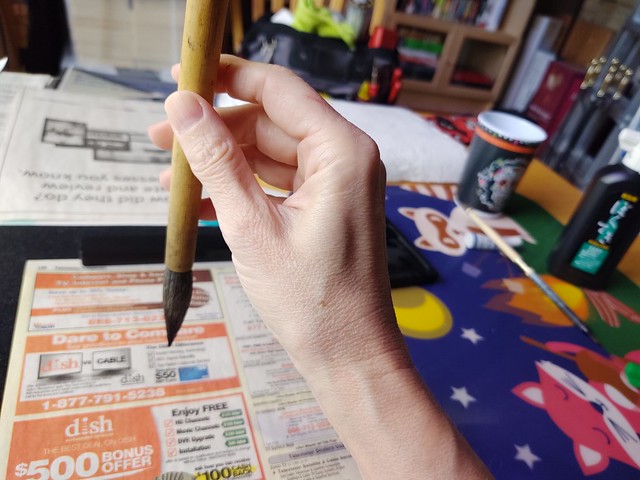 The brush is held vertically and not too firm a hold. I try to imagine holding an egg against the brush and that gets my hand in the correct position. However, as I am used to writing with a pen at an angle, I do have to constantly be aware of the brush and make sure I don’t lean it over. The wrist is kept stable–I use my entire arm for brushing. That requires maintaining a good posture, leaning slightly forward.

No picture here of the posture. If you sit seiza (on your knees), the posture comes naturally, but my ancient arthritic knees are not up to the task. I use a chair and sit a bit forward, with my legs tucked under a bit. 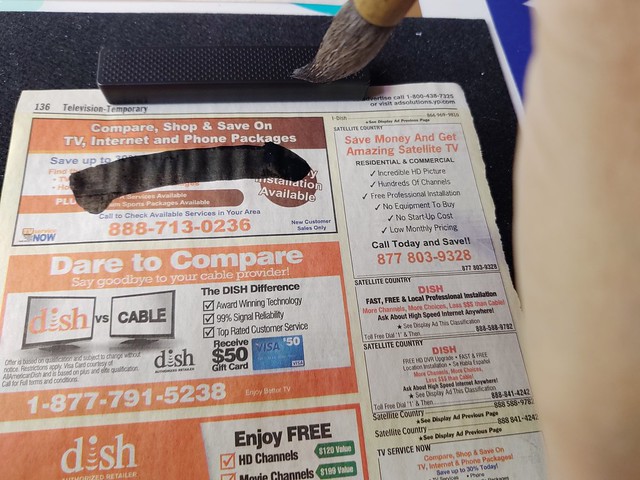 I always start with the character ichi (“One”) and usually do a page or two of that same character. It is not a simple straight line, but a slight curve. It’s also a good way to get into focus. 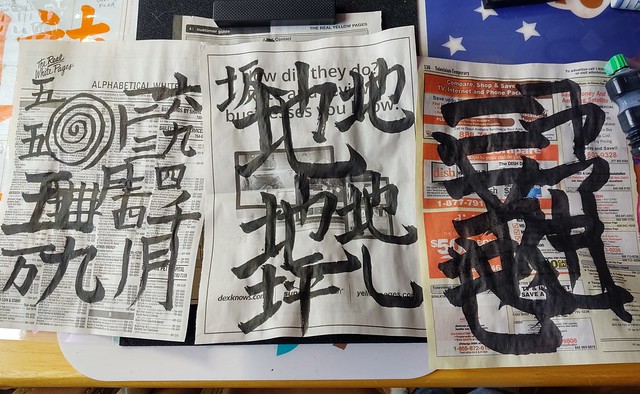 Some of my warm-up sheets. I use either phonebook paper or newspaper for warm-ups and honestly, for a lot of the practice. It’s usually free and lets me save the better paper. The absorption rate is very close to that of washi (“rice” mulberry paper), although washi tends to drag the brush a bit more. 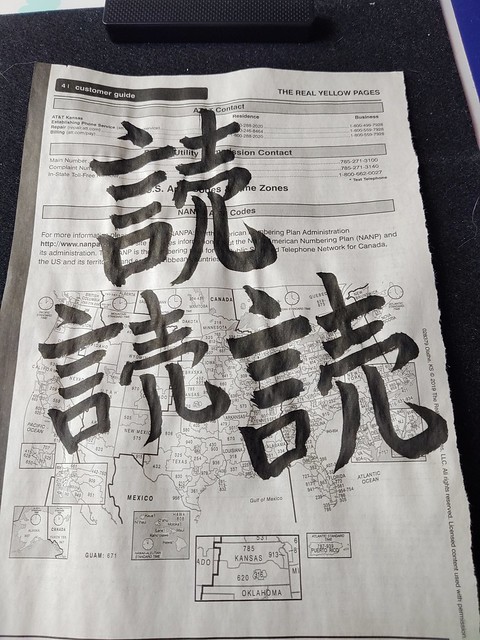 Now I start brushing out the actual kanji I’m working with today. It takes some time to work out proper spacing between the strokes, and between the radicals (subsets) within the kanji. What sucks is if you mess up at one point, it throws the whole character off. My teacher sometimes laughs at my vain attempts to “rescue” a character once I’ve made a mistake. 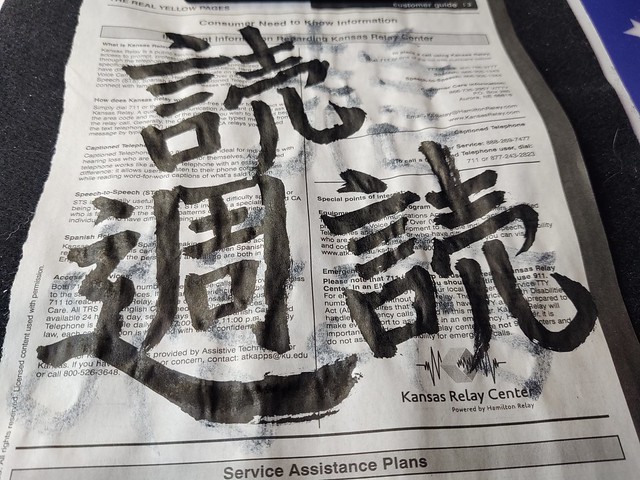 Here I am testing the spacing between shu and doku, making sure the kanji are in line with each other and of the same size. I was using the back of a previously-brushed page and that ended up badly for me because the paper was crinkled and the brush would “jump”, making it difficult to make smooth strokes. 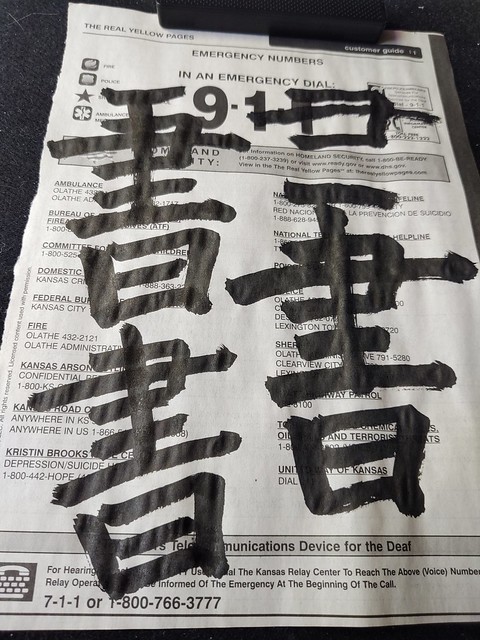 Sho is tricky because you have all these lines, which actually are different sizes and NOT parallel. However, the spacing needs to be consistent between them. 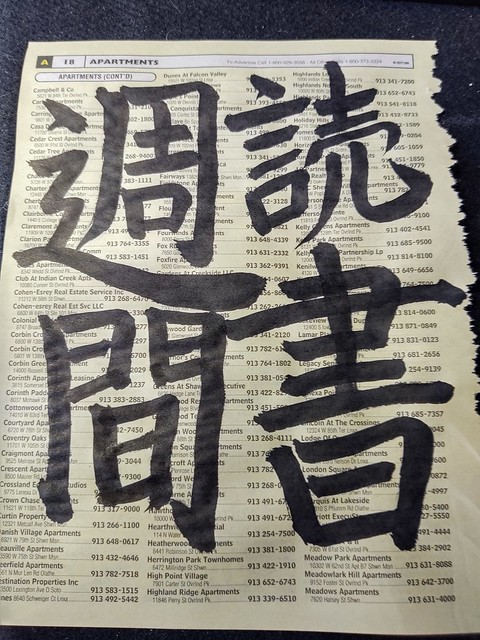 First attempt at the entire proverb. The right side (you read right, down, left, down) wasn’t bad, but I screwed up Shu (the top left kanji) which threw the bottom left kanji completely out of whack. Le sigh. 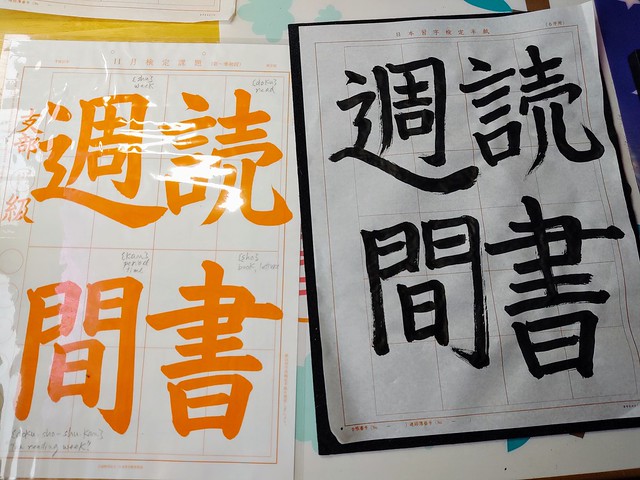 And here is my final attempt for the day. Still not where I want it, although legible. At this point, I’d been brushing for three hours and needed a break! So I’ll pick up with this same proverb tomorrow and see if I can’t make more progress in matching the tehon (example) page.