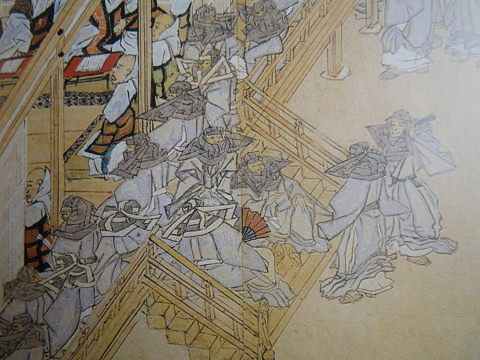 Detail from the Honen Shonin Eden (Life of the Monk Honen) emaki scroll (around 1307), showing monks wearing kato no kesa.

From a question on the Tousando Board about kato no kesa (someone had directed the questioner to my earlier post on the subject):

Yes, from what I have been able to figure out, kato no kesa are literally kesa worn on the head. The sōhei wore their kesa on their heads rather than on the torso as usual (perhaps for freedom of movement? or disguise?). So yes, as a shortcut you could just use a rectangular cloth tied around your head, but properly, those were kesa, which are sewn in a particular way. Most commonly, the “rice-paddy” pattern is used.

Gojokesa 五条袈裟 or Gojo no kesa 五条の袈裟 is also a term for this garment. From the dictionary definition, it was called that because of it was stitched together from five wide cloths (probably referring to the rice paddy design, which is usually done in five rows, but can be seven or nine, depending on the cloth used and the size of the wearer.

I found a cite for why they used discarded cloth:

“It is difficult to determine what is good and what is evil. Laymen say it is good to wear luxurious silks, embroidered garments, and brocades; and bad to
wear tattered and discarded rags. But in Buddhism it is the opposite: tattered robes are good and pure, richly embroidered garments are evil and soiled. The same applies to all other things as well.

As for wearing kesa on the head, it may also have been part of a religious ritual:

“Do-gen Zenji, at the age of twenty-five, was at Tien-tung-shan in China, doing zazen with many monks, when at the end of morning zazen he saw that a monk who sat
next to him held up the okesa with both hands, put it on his head, and with gassho
recited the verse of the okesa:

Great robe of liberation!
Virtuous field far beyond form and emptiness
Wearing the Tathagata’s teaching
We vow to save all beings.

After the monk chanted this verse three times he put on the okesa. Do-gen Zenji had
never seen this great practice before; he was deeply impressed and even shed tears
from a mingled feeling of joy and sorrow.

He talks about this in the last part of the “Kesakudoku,” saying that his robe’s collar was wet from the tears.

“When I was in Japan I read the Ãgama-sutras and found the verse of the kesa; I also found that before one puts on the kesa they should put it on their head. I had not known when and how it correctly was to be done as I had asked my master and friends
but none of them knew. I felt very sorrowful that such a long span of time had passed wastefully without knowing how to handle a kesa in spite of having been at
Hieizan for three years and at Kenninji for nine years. Now, I fortunately could
see and hear with my own eyes and ears the manner in which to wear the kesa
due to good deeds accumulated in previous existences. I was grateful and thankful.
If I had stayed in Japan, I would not have had a chance to see this great
scene. I took pity upon the people in my country because they could not see it”

The Dogen Zenji mentioned is the monk Dogen (1200-1253), founder of the Sōtō school of Zen Buddhism.

What I’m trying to research now is how the construction of the kesa may have changed over time. There are instructions online in English for making kesa (some quite extensive), but as they are concerned with modern religious Buddhist practice, they don’t really go into how the kesa might have evolved. We know that not all kesa were made from toilet rags–some extant pieces are quite fine, and may have been made with donated brocade. These are often seen being worn by wealthy lay-people. Both monks and lay-people (who had taken partial vows) were encouraged to wear kesa as a sign of devotion.

I dunno, just scratched the surface on what is a very rich tradition. It should go without saying–if you want to wear kato no kesa as part of your persona, please remember that it is still part of an ongoing religious tradition, and treat the garment with respect.

One thought on “More on Kato no Kesa”