This was going to be a “Help, fashion emergency, should I wear this old thing or my standby Anglo-Norman garb that everyone has already seen this weekend?” but since the Calontir Coronation got pushed back a week due to the impending Ice-pocalypse, I should have time to finish something else, so I’m just posting these because I have so few pictures of myself in Japanese garb.

At my size, I feel a bit self-conscious wearing it. My body type is 100% Hungarian-American Good Peasant Stock–we’ll live during those famines!–and utterly lacks the narrow-shouldered, slim silhouette common to the Japanese. Which is why I like to make and wear garb of various cultures and not just Japanese. I do look better in European styles.

I’m wearing this as a kosode (“small-sleeved” kimono), but it was originally made as an uchikake (worn open over kosode) some 12 years ago. I’ve gain a lot of weight since then, so it doesn’t fit properly. It should be more baggy, actually, with very wide panels. There are some design things I would do differently now because I know better, but this wasn’t bad for an early work. While the Chinese brocade I’m wearing is modern, it’s not too far off from what might be worn–the Japanese DID import Chinese brocade. Besides, this was on sale and affordable.

I am wearing two kosode underneath–it’s cold here. They wore narrow obi (belts) during that time, just below the waistline, similar to how men wear obi now. This one has some interfacing to stiffen it up a bit, but time has softened it and I need to make a new one.

The wimple-like thing is called a zukin (I’ve written a few times about those–this one is a sode-zukin). My short and modern haircut just doesn’t go with medieval garb (of any country) at all, so I always wear some kind of head covering. Fortunately, it was common for upper-class women to take partial Buddhist vows, so you can wear zukin with fancier garments, although they are much more commonly used with lower-class or monastic garb. 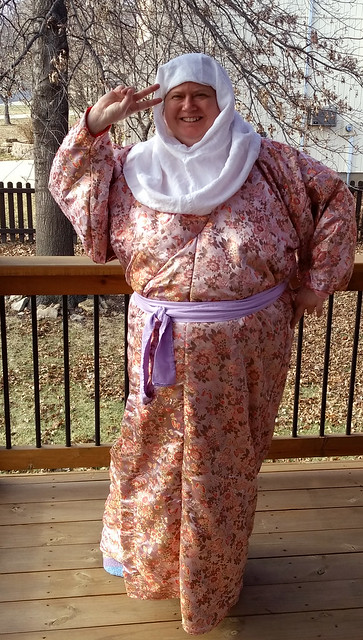