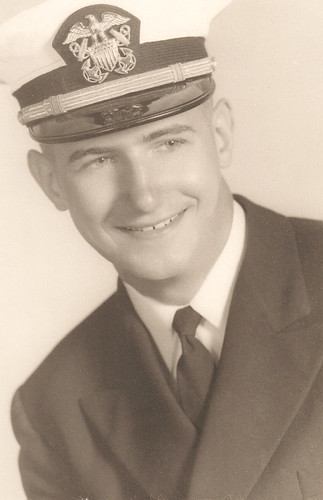 I recently got a copy of this book, How to Read Japanese Poetry (New York; Columbia University Press, 2019) ISBN 978-0231186834, and have been enjoying it thoroughly. Steven Carter is the author of several books translating Japanese poetry into English, and his Traditional Japanese Poetry: An Anthology (Stanford; Stanford University Press, 1993) ISBN 978-0804722124 is usually the first book I recommend to people who want to explore Japanese poetry. This book is a little more intimate, where Carter presents poems in a variety of styles, with translation notes and historical background. Less poems than his earlier book, but he digs down into further detail. If you are at all interested in Japanese poetry, definitely add this book to your library. https://www.amazon.com/Read-Japanese-Poem-Steven-Carter/dp/0231186835 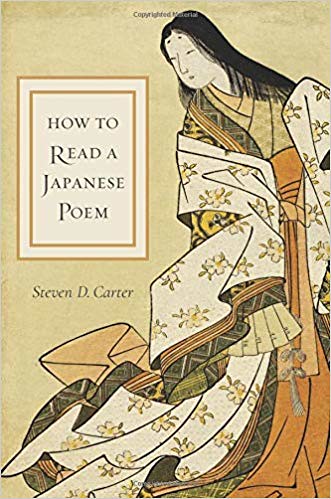 Of possible interest to poetry enthusiasts: Christopher Kern, a visiting professor at Auburn University, is in the process of translating the Gosenshū (Gosen Wakashu), collected about 951 CE, which was the 2nd of the great Imperial Anthologies. He has put up a Wiki with what he has so far, including sources used and analysis of the poems. Check it out here: http://jchristopherkern.com/Wiki/Gosen_wakashu

There is a short wikipedia entry about the Gosenshū here: https://en.wikipedia.org/wiki/Gosen_Wakash%C5%AB

And a brief entry concerning the 21 Imperial Anthologies here: https://en.wikipedia.org/wiki/Chokusen_wakash%C5%AB#Nij%C5%ABichidaish%C5%AB

So while digging through bins in the garage, I came across this ancient treasure. My first epic poem (and illuminated book–although badly illustrated would probably be more accurate) from when I was 12 years old. Done on index cards and bound with glue and a black ribbon with yellow flowers. I give you–THE ALAMO!

The Alamo
A Poem by Maria Szabo

The Alamo was a Mission
A mission that was a success
In short, the Mission Alamo
Was the very best.

The Mexicans did not trust
The Americans, who were harrowed
Then the Decree of 1830
Added upon their sorrows

Sam Houston was a general
Who called the men together
So Houston said to his men “Give up?”
And the men replied “Never!”

General Houston appointed a man named Travis,
Who was told he had a job,
He took 183 men to the Alamo
To await the oncoming mob

With Travis was James Bowie,
Whose knife had his name,
Also Davy Crockett
About to go in his fame

“Surrender to us!” said Santa Anna
“And we will let you go!”
Travis fired his largest cannon!
Clearly, the answer was NO! 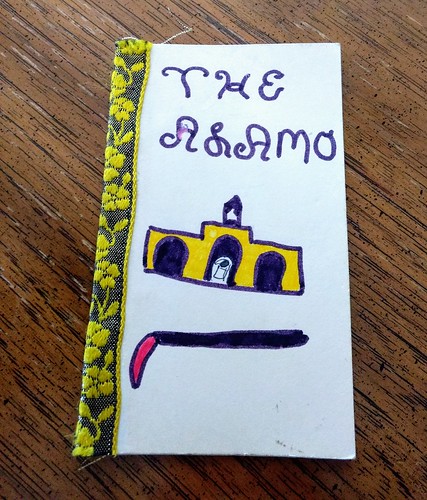 Cover. Bound with black ribbon and yellow flowers (for the Yellow Rose of Texas). Death looms in the shadows of the Alamo. 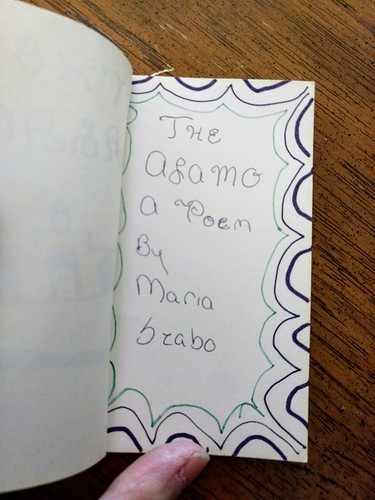 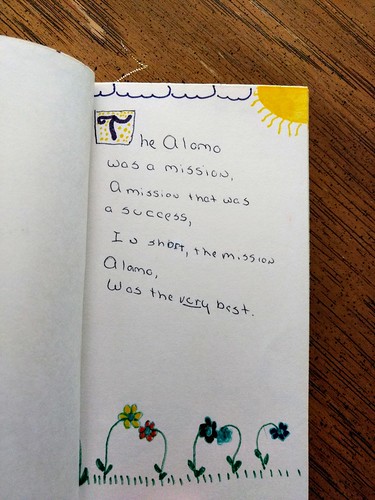 Looking back, I’m impressed that I put little illuminated letters to start almost every page. 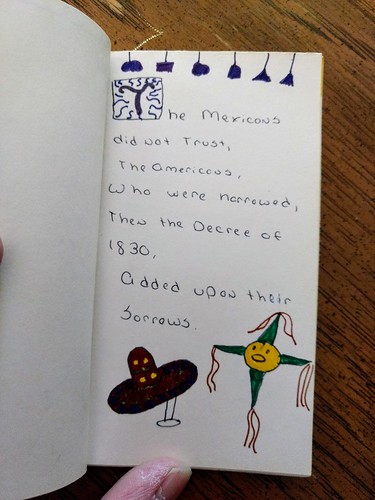 So of course, Mexicans meant sombrero and pinata. Hey, I was 12. 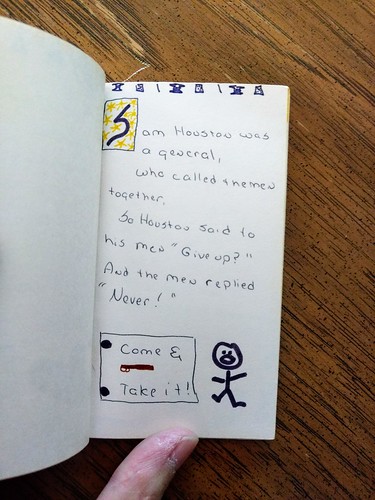 Historical fact: The Texans really had a flag with a cannon saying “Come and Take It!” 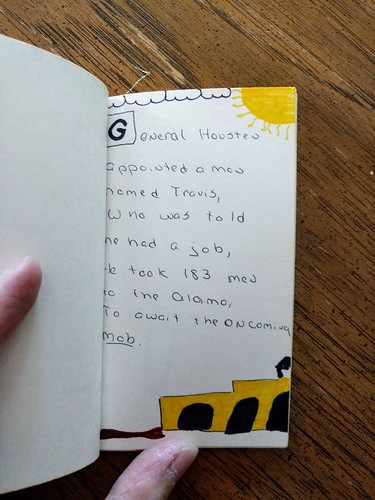 And there’s the Alamo. I’d been there on a family trip a few years before. There were actually more than 183 people in the Alamo, but I didn’t remember that at the time. 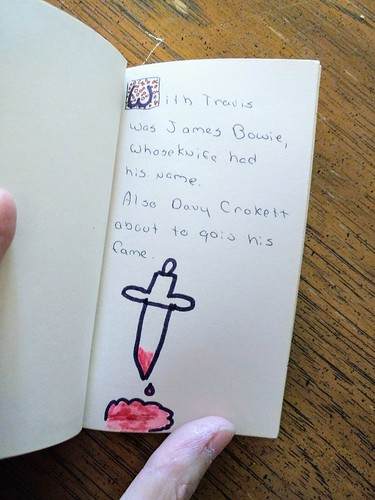 Bloody Bowie knife. I was a weird kid. 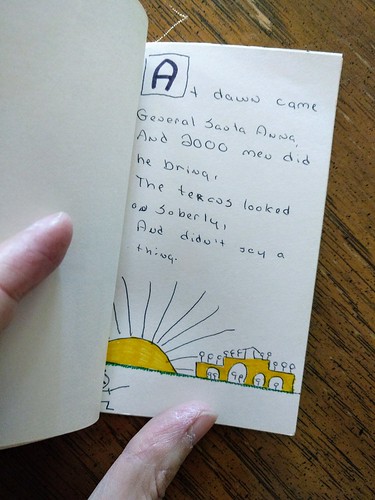 You can’t really see in the picture, but Santa Anna with his big hat is marching in on the very left bottom of the page. I didn’t take into account binding when I drew the pictures. 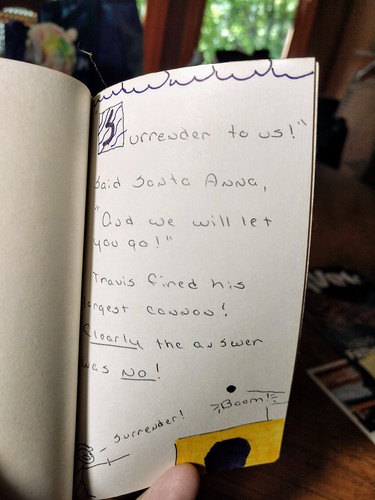 Okay, you can see Santa Anna and his big hat a little better here. I was a little obsessed with that hat of his. 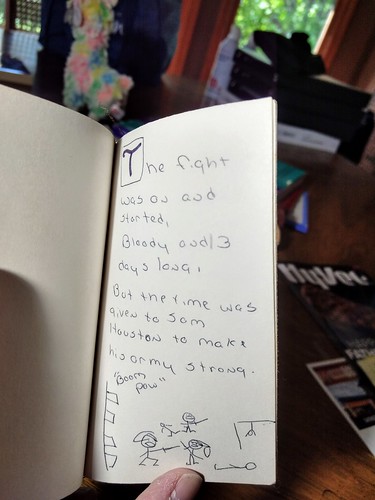 The bloody battle. I somehow forgot to mention that the Texans lost the battle? But that the battle was important because it gave Houston time to organize his army. Still, how the heck did I forget to mention they lost?!

And a sudden jump to the Battle of San Jacinto. In the men’s thoughts (big faces on the right) are Davy Crockett (with his coonskin cap), James Bowie (with his muttonchop sideburns) and William Travis, who was boring looking and didn’t make much of an impression on me. The Mexicans are shouting “Me no Alamo!” and “Me no Goliad!”, which actually did happen. The Goliad Massacre on March 27, 1836, was overshadowed by the Battle of the Alamo, but twice as many men were killed there. 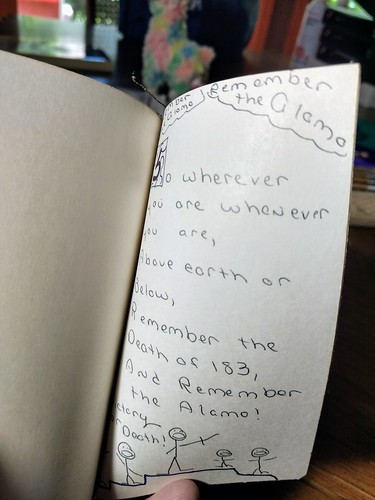 So the stick figures are shouting “Victory or Death!” Again, I forgot about margins when drawing this.

Okay, not an epic for the ages, but hey, I was 12! Also not great at drawing. This was a school assignment for my Texas History Class and I don’t remember what grade I got, but did remember getting points for creativity.

I only have bits and pieces of my poetry from that time, mainly things I published in the school newspaper. I stopped writing poetry for a long time after my 8th grade English teacher told me that my poems were “stupid.” She was a horrible teacher. You should never say that to a child. I didn’t start writing poetry again until I was in my 30’s.

I see the first buds
On my neighbor’s tulip tree
Begin to blossom
Could it be that springtime is
Finally smiling upon us?

Travelers stories
Nostalgia envelopes me
That scent of pine trees
Humid air, those bluegrass aires,
The soft drawls of my kinfolk

Armchair traveler
When will you wake up and step
Outside of your door?
Come on! The wide world awaits
Yet my heart is hesitant 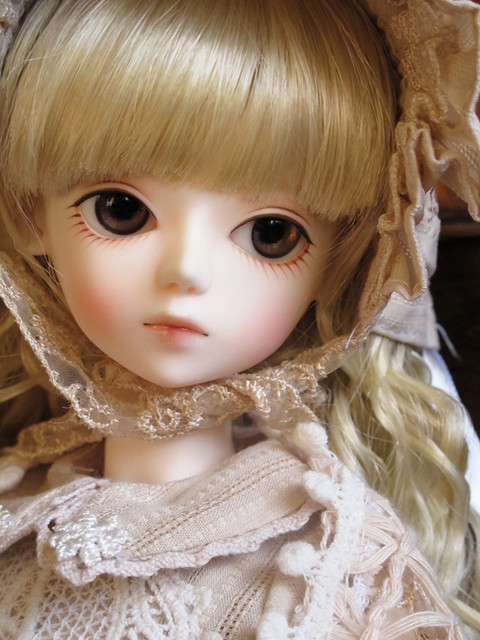 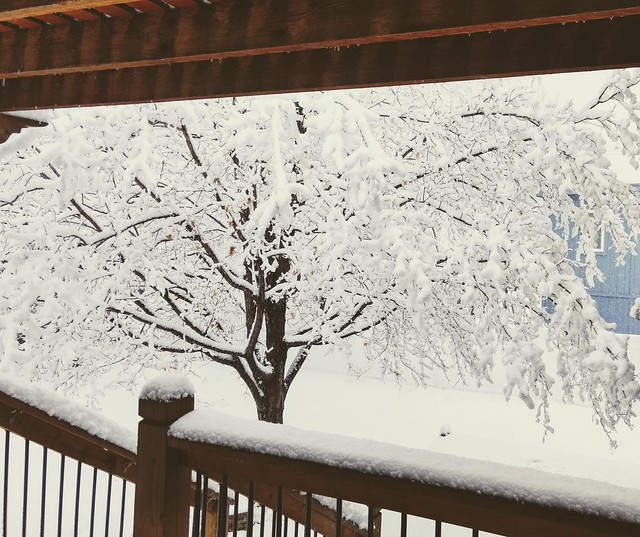 Maple tree under snow in my backyard, photo by myself

Pain, past and present
Winter is not my season
Knife-sharp, the twisting
Of my body, of my mind
Warped into a silent knot

How to speak of it
World weariness infusing
Each waking moment
No rhyme, reason, or excuse
The sleet falls unrelenting

Here! And here! And here!
The world is just too full of
Interesting things
The seasons pass too quickly
If only I had more time