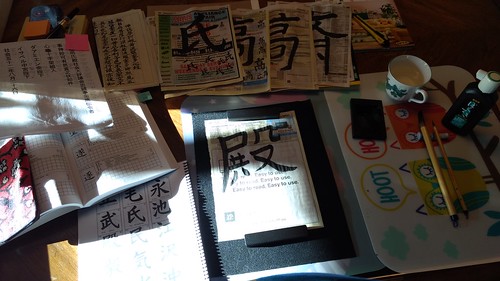 Link: Fires burn to burns away my illusion

Link: the light is there to fires burn

This poem was the result of a challenge: pretend for a moment that social media existed during your persona’s time period. What event would send them into a tweet storm, and what would that post look like? Bonus points awarded for posts under 140 characters.

Hey, that’s simple for tanka! Even more simple if written in Japanese. However, I got three lines in and my grammar failed me. Adjectival nouns are straight-forward (add な) but in Ancient Japanese, it would be なり, I think? Anyway, it didn’t scan. I need to study more. So this came out in English and not a stylish poem at all, but it fit the challenge.

link: progression: it’s full of stars to the heavens shine down

link: glow of fireflies in the twilight to fireflies dance and die.

“My God it’s full of stars” is from Arthur C. Clarke’s Novelization of 2001: A Space Odyssey. Although widely believed to have been said in the movie, it actually wasn’t. I refer here to things I thought I heard, but were not actually said. That seems to happen to me a lot nowadays. I don’t like it.

The poem can be read forwards or backwards.

link: cannot outrun to racing past us

Written for the occasion of Rhodri ap Hywel’s birthday

Enshrined in my heart
The virtues of my homeland
Truth, hope, and freedom
A magnificent mirage
Reflected in spangled stars

Link: Dwell truth and hope and freedom to Enshrined in my heart

Alone I await
A two-tongued answer that is
Sharpened on both sides
A painful path, yet beyond
Dwell truth and hope and freedom

Alone I awake
The rosy fingers of dawn
Stir the horizon
The lark’s song, so sweet, so cruel
Mocks me in my solitude

Refreshing coolness
Shining raindrops glistening
On the moonlit grass
Breathless, I watch his breathing
My head pillowed on his arm