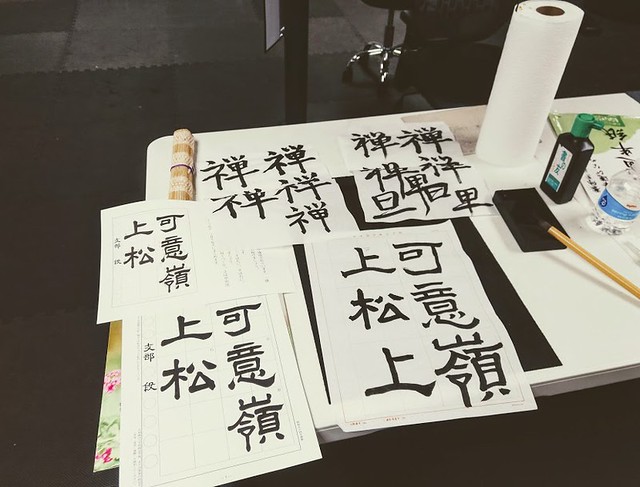 Life happened and I had to start my 100 Days of Arts and Sciences from scratch. I’m on Day 6. Here’s what I’ve been doing so far:

Day 13: went to shodo lesson, took apart old meisen-silk haori. Not one of the better piece I have, although a nice black/grey pattern. It’s heavily patched, and I might keep those pieces as real-life examples of how patching works, since I seem to have fallen into a research hole regarding that subject.

Day 14: Worked on RUSH class outlines, exploring reisho files that my shodo teacher gave me to work with, went through a couple of fabric bins of old kimono I haven’t taken apart yet. Was shocked to find that some of them might fit me now that I’ve lost so much weight! However, doing proper kitsuke would be a challenge, as even thin I am tall, with broad shoulders and hips. Still, wondering how I might be able to adapt a few of the plainer (ie less obviously modern) kimono into kosode without having to take them completely apart? Obviously change the sleeves. Length isn’t a problem because of my height, but not sure about how the width would play out. May try one and see what happens. I never expected to be thin enough to have these come close to fitting.

Met with friend regarding her project, shared research, need to make some scans and copies for her, and also dig up some literary references. Sorry about vagueness, not technically my project.

Made progress in my quest to make a byobu screen–talked with someone who might be willing to do the woodworking side of the project, or maybe at least show me how to do it? Anyway, that’s more than a year off, as I need to focus on making garb.

Sorted through some fabric, identifying some future projects utilizing fabric I have previously used in old outfits that I took apart. I really like the idea of reutilizing fabric when possible. Have a bit of a conundrum, though. I have some very nice Chinese brocade that I picked up on clearance years ago. It does have the right look for 16th century uchikake, but it is polyester and there is no getting around that. But the fabric was bought and paid for nearly 20 years ago, so I might as well use it? If nothing else, to learn the ins and outs of sewing uchikake inexpensively? Although poly doesn’t really act much like real brocade, but OTOH, real brocade is frightningly expensive…

Will post more on this, with pictures to illustrate what I’m talking about. I’m all about learning on the cheap stuff, but OTOH, it would be nice to look like I walked out of a picture, which is kinda hard to do with the cheap fabric sometimes.

Requested Inter-Library Loan on three books, no telling what luck I’ll have on them, but our library is usually pretty good about obtaining things. 2 books regarding boro (technically post-period, although there WAS patching in period per literature. The question would be to prove how it was done.) And trying again to get my hands on Kurihara Hiro and Kawamura Machiko. Jidai Ishō no Nuikata. Genryu-sha Joint Stock Co. Tokyo: 1984. I know people who have gotten it through ILL, but most of them were associated with universities. Not sure if it’ll fly from a civic public library.

Music practice cancelled, one of our trio was sick. Looked over the indices of a book on tenshou examples that my shodo teacher wrote. He’s added to the book since I bought it, but I need to identify which pages I need so I don’t have to buy a whole other book.

Research time, looking up examples for a friend’s project, which I can’t discuss further since she wants to surprise people. Also found out one of my favorite online sources, the Multilingual Pictopedia of Everyday Life in Medieval Japan is not where the old links used to be. Fortunately, I did download them and kept extra copies on another harddrive, but I hate that the PDFs aren’t available anymore. Several libraries in the US do have copies of the 3-volume work, although when I did Inter-Library Loan for them a couple of years ago, Stanford University charged me $20! (Most of the time ILL is free or maybe a couple of dollars at most!)

Got in some of the materials for my upcoming RUSH Japanese calligraphy classes. The ink is fine, but I’ll need to prep the brushes. That will probably take a few hours. 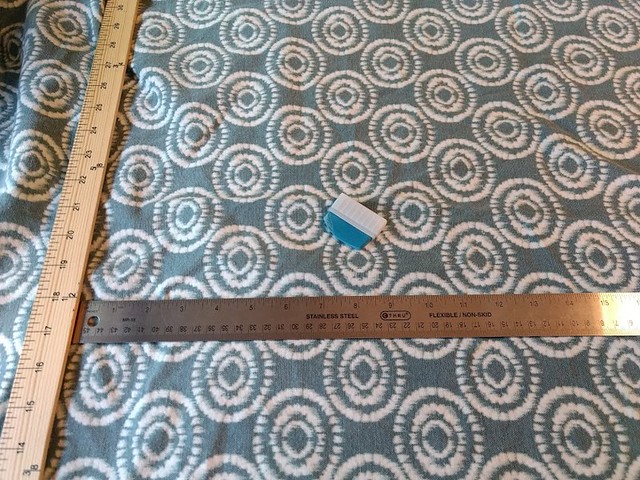 The canvas-weight shibori patterned material that I am taking apart to repurpose. Tried to make a kosode from it, but it is too thick and scratchy, and lining it would make it too warm. So it will be made into something else, probably some kind of carrying bags. I got the material cheap when Hancock’s went out of business, $11 for 9 yards.

Day 4 of 100 Days of Arts and Sciences. Soprano recorder practice, more on the kanji radicals workbook, shodo practice, pulled together some of my Japanese doll research to answer a question on SCA Japanese FB page.

Day 5 of 100 Days of Arts and Sciences. Practiced tenor recorder, wrote a couple of tanka, did some Japanese clothing research.

Day 6 of 100 Days of Arts and Sciences. Practiced soprano recorder, went to Shodo lesson, made progress on Class prep for RUSH, fell down research hole about how lower-class Japanese patched/repaired clothing. Mostly 19th and early 20th century information, but can certainly tie literary references to the practice (regrettably vague), but some Shōsō-in garments show this kind of patching or similar. Worth digging more into. Next few days will be slow, have some Real Life constraints on my time, but should be able to do something, even small!

Day 7 of 100 Days of Arts and Sciences. Nursing a migraine today, so just did some hand-sewing repair on a cloak and some zukin where threads had come loose. Took apart a trial kosode I made from some shibori-designed fabric I picked up on clearance when Hancock’s closed. Thought it might work for garb. It looks right but it is almost canvas weight and would be too hot and scratchy. Will probably repurpose the material to make bags or something like that instead. Waste not, want not. 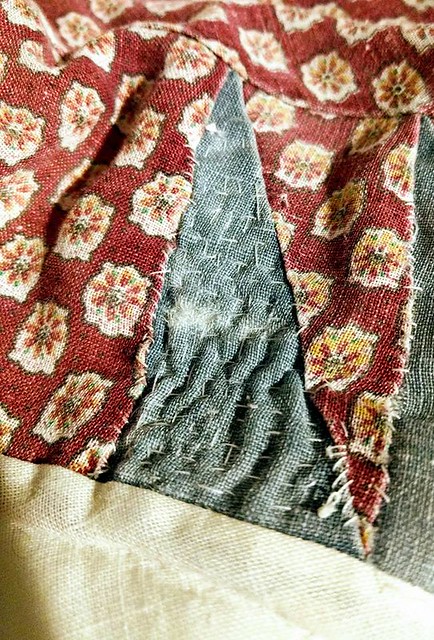 First attempt at using Japanese boro stitching technique to fix a frayed area on a quilt. Simple running stitch used in period. Not complete success. Need more even stitches, probably slap a patch over the area and then try running stitch and see how that goes. Just experimenting on an idea.

Day 8 of 100 Days of Arts and Sciences. Wrote two tanka and a haiku, more reading on Japanese work clothes, soprano recorder practice, sourcing materials for my RUSH classes (and trying to remember where I stashed those student brushes–I’ve given some away but I know I have more.) I need to fit in some time tomorrow to get that kosode sloper put together so I can see if my updated pattern works. #somedayiwillbeorganized #todayisnotthatday

Day 10 of 100 Days of Arts and Sciences. Updated SCA blog, finished reading book on Japanese work clothes, finished taking apart shibori kosode (fabric will be stored an be reworked into carrying bags later, after I get more clothing sewn!).

The book I’ve been reading about Japanese work clothes is Stories Clothes Tell: Voices of Working Class Japan by Horikiri Tatsuichi, translated by Reiko Wagoner. ISBN 1442265108 (ISBN13: 9781442265103). The author spent decades traveling around Japan and collecting examples of working-class clothing, mostly from the Meiji, Taisho, and early Showa era. (So he focused roughly 1868 to the early 1960’s in time period.) This book is a translation of several essays that Horikiri wrote concerning items from this collection. While he tends to go a little far in conjecture about items, the small details about these work clothes and how they were used is a fascinating read, if a bit melancholy since some of these stories really bring into focus how desperately poor these people were.

There are more “social histories” now than there used to be, that focus on the lives of the common people. Since the time period this book focused on was post-1600, many items he discussed were not exactly applicable to SCA, but his approach is certainly one we can apply. It was remarkable to see how slowly the clothing evolved in usage–Horikiri discusses the evolution of some of the items from Edo-period clothing. With a little work, some items might be placed before that. It would take looking at visual sources and perhaps literature, since no extant pieces would exist.

The book was also useful in isolating some Japanese terms regarding fabric and clothing and includes a glossary, although most of the items mentioned are Edo-period or later. Still, there is some hidden treasure here. In one essay, he speaks of the difference between the rough-woven asa 大麻(hemp) cloth used by the lower classes, and the finer-woven joufu 上布, which seemed to be linen or perhaps a mix of hemp and linen? Definitely of a much tighter weave, and according to this Japanese wikipedia article on 上布, there are some extant pre-1600 examples of joufu?

Anyway, it looks like it would be worthwhile to track down more of these specific terms, not often referenced in English language sources!

Day 3 of 100 Days of Arts and Sciences. Practiced tenor recorder and progressed on kanji radicals workbook. 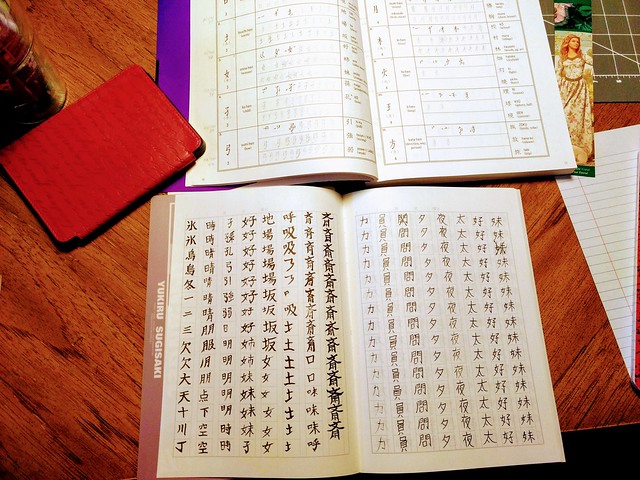 So I decided to start “100 Days of Arts and Sciences” because I have a lot to get done, especially regarding sewing since not much of my old wardrobe fits anymore. 100 days from today will land me on the first Sunday of Lilies War. Seems like I did a lot today but some of it was continued from earlier and I am also counting study/practice because any project I do has a lot of practice/experiments/humiliating failures as part of the process. And research, always research.

1. Finished taking those huge wool curtains apart. Washing comes next but I need to figure out how I want to do that. (Dryer? Air dry? Can I even use Wa Paste in a high efficiency washing machine?) 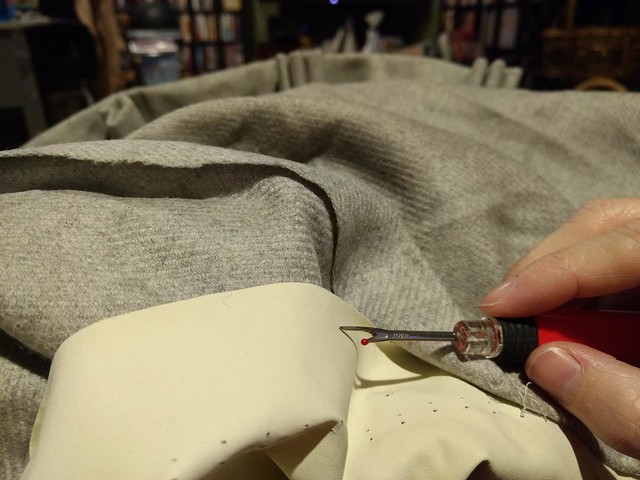 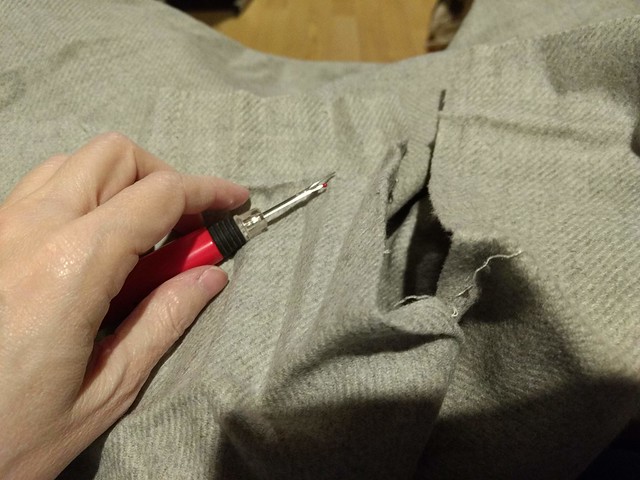 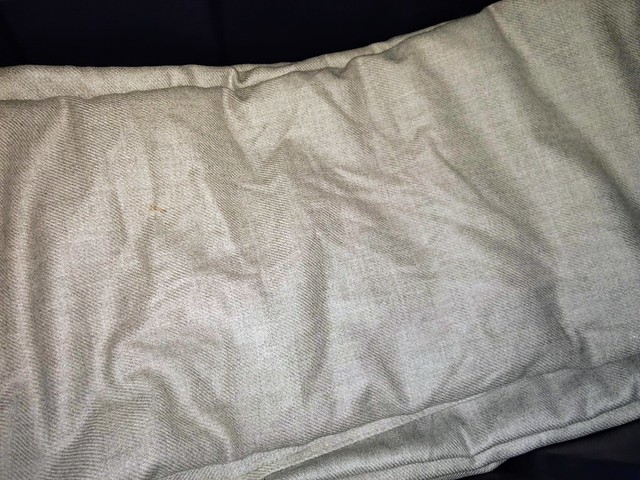 2. Cut out material for a sloper to experiment with my kosode pattern. This pattern is for summer wear, so unlined. 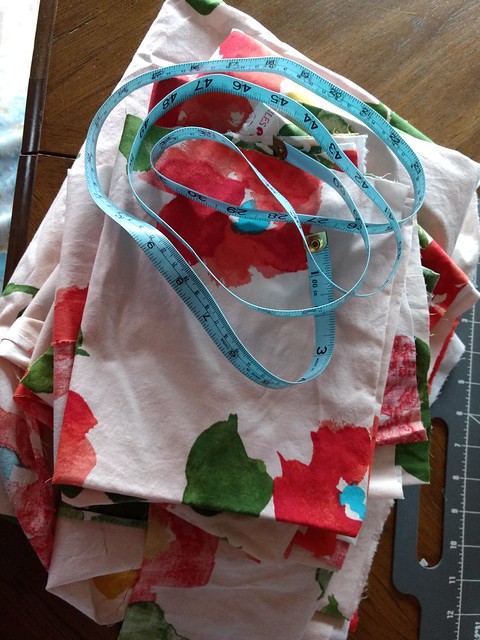 3. Got in some yojijukugo (4 kanji idiom) calligraphy practice with the medium brush. It’s a good way to work out space and balance, and easier to see your mistakes. 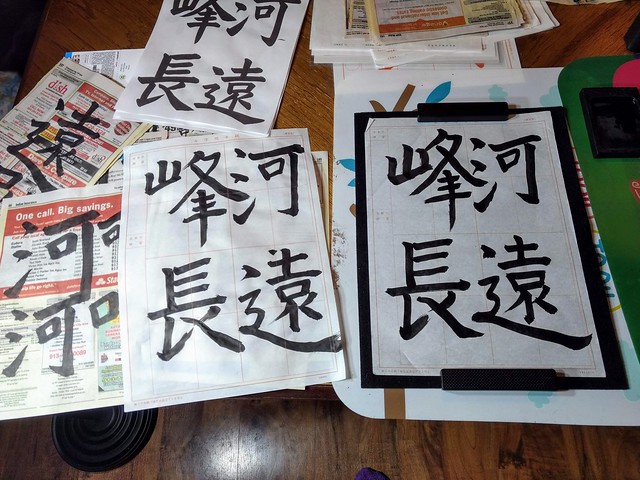 4. Continued my study of kanji radicals. Not technically shodo since I use a pen or pencil, but important for learning stroke order and proportion. 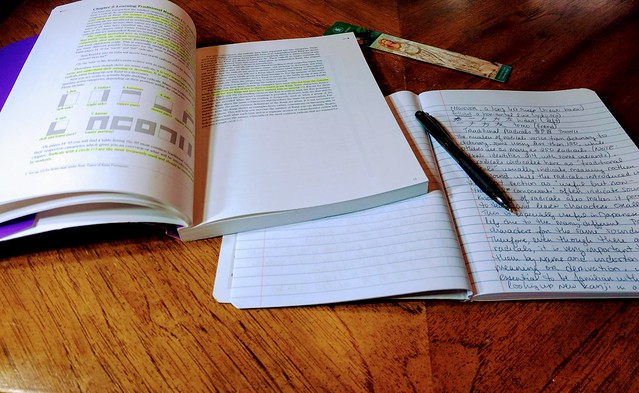 5. Also practiced my recorder a bit but forgot to take a picture. But I do have an awesome new wooden soprano recorder to play with! But here’s a picture of me at music practice a few weeks ago, with my friend’s cat helping me out! 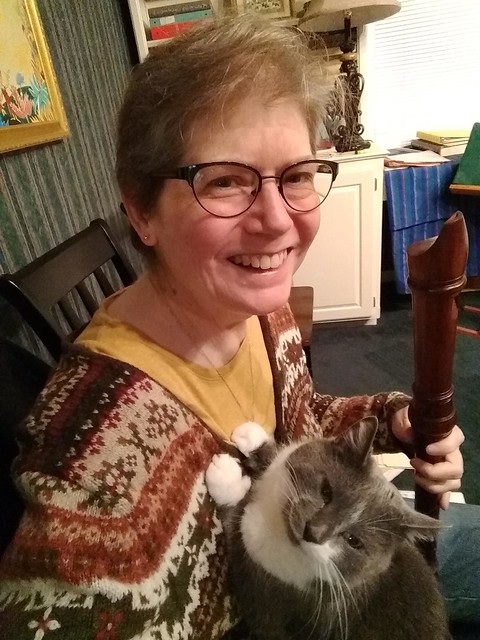 Definitely will not be able to do this much every day but here’s to a good start!