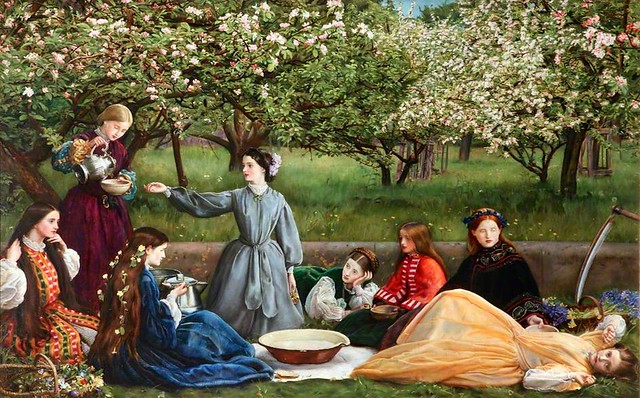 I chose apple trees because they are commonly seen in the Midwest and when we lived in Iowa, we lived near an orchard. Kigo 季語 in Japanese poetry are words and phrases associated with seasons. They are often gathered in collections called saijiki 歳時記. However, because the climate where I live in Kansas is far different from that of Japan, I sometimes choose kigo that apply to what I see in my everyday life. The most common flowering trees that were used in medieval tanka were the plum (early spring) and the sakura (middle spring).

Apples actually were not widely cultivated in Japan until the Meiji period (1868-1912), although they are quite popular there now. Here is an interesting list about some Japanese fruits and when they were first cultivated there.

Due to the popularity of the haiku form of poetry, there are some saijiki lists online for English speakers. There is a good one heretranslated by William J. Higginson that focuses on Japanese kigo. There is also an interesting one here called the World Kigo Dictionary that has links to lists for kigo in other parts of the world. However, while they have some for North America, there doesn’t seem to be one specifically for the Midwest. (One for Oklahoma, though, and one for the Northern prairie–but from the descriptions I was reading, that sounds like Minnesota or the Dakotas? Not quite the same thing as here.) There are a number of other lists online as well.

However, while kigo developed out of tanka poetry, some of the traditions were established in the Edo period and are particular to haiku, so if you are writing tanka for SCA (medieval reenactment) purposes, double-check.